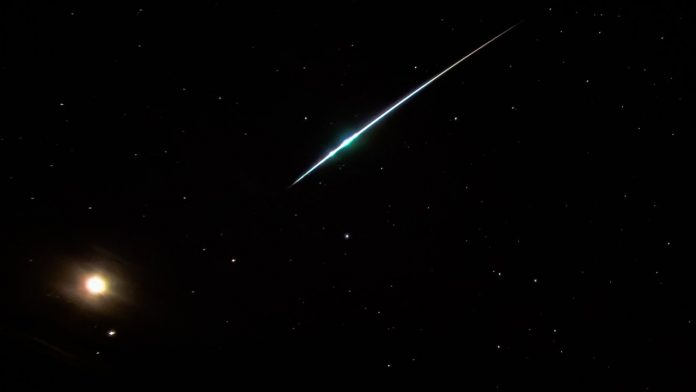 Fragments from the asteroid 3200 Phaethon will burn brightly in the sky.

We on Earth get to take in the wonder of a meteor shower typically when our planet passes through the trail of a comet. The bits of rock and debris burn up when they hit Earth’s dense atmosphere and streak across the sky.
But the Geminid meteor shower — which will reach its peak Thursday and Friday night — is not typical. You’ll be witnessing bits of an asteroid break apart in the sky. It’s also one of the best and most reliable meteor showers of the year.

What are the Geminid meteors?

If you go outside and watch, you’ll be seeing bits of debris from an asteroid named 3200 Phaethon burn up in the night sky.

Its tail is likely due to its orbit, which brings it very close to the sun (in Greek mythology, Phaethon is the son of Helios, the sun god). The heat of the sun fractures the rock and creates the trail of debris that the Earth is about to barrel through. For this reason, 3200 Phaethon is sometimes referred to as a “rock comet.”

What’s more, those asteroid bits are denser than typical meteor kindling, which means they move more slowly across the sky as they burn. They also tend to be a bit brighter than the typical meteor. “The brightest often break up into numerous luminous fragments that follow similar paths across the sky,” the Royal Observatory Greenwich explains in its guide to the night sky.

How and when to watch the Geminid meteor shower

All of this makes the Geminids “the best and most reliable of the annual meteor showers,” usually producing more than 100 meteors per hour at peak, NASA notes. “Folks in suburbs will see fewer, 30 to 40 per hour depending on the lighting conditions.” (Find the darkest spot you can with this dark sky finder app.)

Thursday and Friday will be great nights to watch the meteor shower, as the moon will set before midnight (check out when the moon sets in your area here). With the moon below the horizon, the night sky will be extra dark, and the meteors will shine brightly. The very best time to watch, Sky and Telescope magazine reports, will be right before dawn on Friday, December 14. That’s the peak of the peak.

The Geminids appear to radiate out of the constellation Gemini, but because they shoot off in all directions, all you have to do to see them is look up. Allow some time for your eyes to adjust to the darkness, and you may catch a meteor every other minute or so. Also, remember: It’s December. Dress warm!