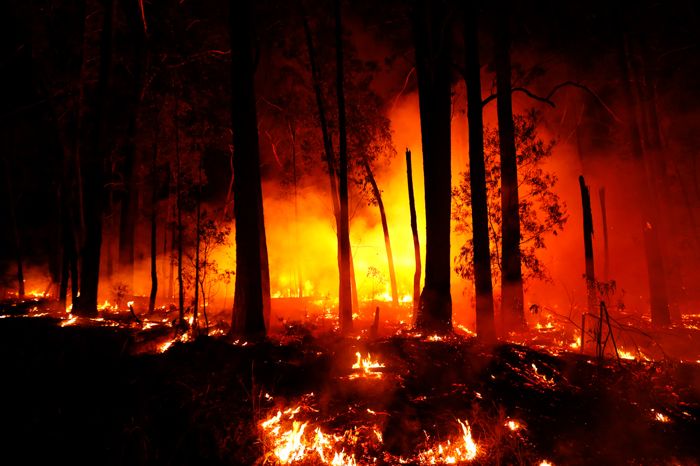 Scientists have published the first assessment quantifying the role of climate change in the recent Australian bushfires.

Global warming boosted the risk of the hot, dry weather that’s likely to cause bushfires by at least 30%, they say.

But the study suggests the figure is likely to be much greater.

It says that if global temperatures rise by 2C, as seems likely, such conditions would occur at least four times more often.

The analysis has been carried out by the World Weather Attribution consortium.

– A visual guide to Australia’s bushfire crisis
– Climate change : Where we are in seven charts

“Last year the fire prevention system in Australia, which is extremely well prepared for bushfires, was straining. It was at the limits of what it could handle, with volunteers working for weeks on end,” said Prof van Oldenborgh.

“As the world warms, these events will become more likely and more common. And it’s not something that we are ready for.”

During the 2019-2020 fire season in Australia, record-breaking temperatures and months of severe drought fuelled a series of massive bushfires across the country.

At least 33 people were killed and more than 11 million hectares (110,000 sq km or 27.2 million acres) of bush, forest and parks across Australia burned.

Although it makes sense that human-induced global warming is likely to have led to more bushfires, assigning a figure to that increased risk is complex.

That is because other factors not directly related to climate change may also play a significant role. These include increased water use making the land drier, urban heating effects or unknown local factors.

Nevertheless, Prof Jan van Oldenborgh and 17 fellow climate scientists from six countries gave it their best shot. “It was by far the most complex study we have undertaken,” he told.

The researchers found the climate models consistently underestimated the observed increase in temperatures in south-east Australia and so could not pinpoint a figure for the increased risk from climate change. They were, however, able to tease out a minimum risk.

“We show that climate change definitely increases the risk of the extreme weather that makes the catastrophic bush fires (that south-east Australia has experienced) in the past few months more likely by at least 30%.

Prof van Oldenborgh is among those attempting to find out if the current climate computer models really are underestimating the influence of global warming – and if they are, working out how to correct them.

His co-author Prof Friederike Otto, from the University of Oxford, said such work was needed to build a more accurate picture of the risk of bush fires.

“We have only given a lower bound in answer to that question, confirming that climate change is indeed an important driver – also locally – and that we need to continue to test our models in the real world,” she explained.

This would “improve them so we can provide higher-confidence risk information at the scales where people live and make decisions”.